Do You Read Rome’s Symbols?

Do you notice some repeatedly-shown Rome symbols, when you visit Rome city, crossing those beautiful but crowded streets, squeezing into the crowds and trying to take a photo of the famous Trevi Fountain, or staying speechless in front of Colosseum.

They are actually all round the city, maybe right under your foot, in front of your eyes, or even showing on your Rome souvenir T-shirt or magnet.

Please note that this post contains affiliate links and any sales made through such links will reward me a small commission – at no extra cost for you. That’s just the beauty of affiliate marketing and you can always drop me an email for further information or simply refer to Privacy Policy terms here. 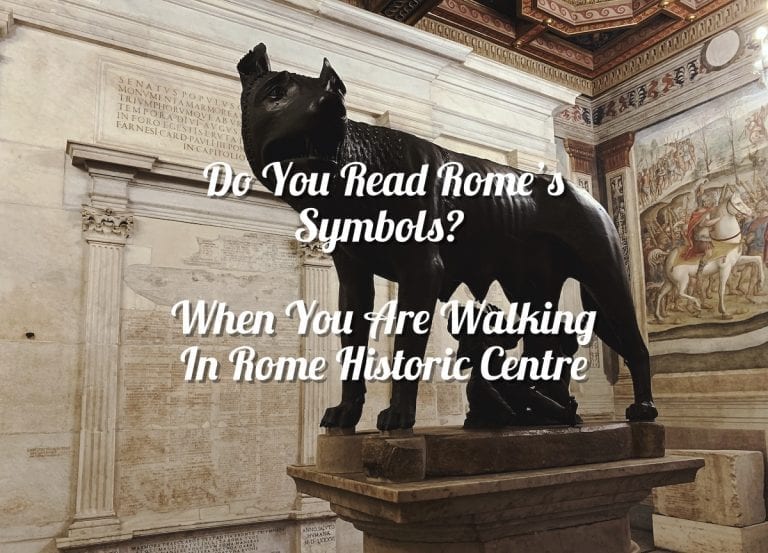 One day I was wandering and spending my after-class sunbath hours near Fountain Catechumens, I noticed those four abbreviation letters “SPQR” on the base of Fountain. Then I realized this term appearing almost everywhere in Rome, and even I am reading SPQR – A History Of Ancient Rome by Mary Beard, which tells the ancient Roman lifestyle in a very interesting way. You can also watch a related documentary about SPQR by Mary Beard on Youtube. I’ve shared directly in my Free Resources to visit Rome.
If you are walking in Rome now and reading this post about Rome symbols, maybe you will find one of the symbols right under your foot, on that bronze sewer cover.
Then I made the research for this topic. I realized “SQPR” even exists outside Rome, for example, Hamburg Cityhall (Rathaus) has it. Well, probably it’s a culture-export by Roman Empire!
Content Index show
1 So, what is “SPQR”? What are the other Rome symbols in the city?
1.1 Lupa
1.1.1 A Mythology of A She-wolf & Two Brothers?
1.1.2 Prostitute?
1.2 SPQR - Senātus Populusque Rōmānus
1.3 Eagle
1.4 FERT

So, what is “SPQR”? What are the other Rome symbols in the city?

When I was first backpacking from north to south in Italy, I see the she-wolf in Pisa, Florence and Rome. At that time, I felt pretty confusing about the origin of she-wolf. I asked not only once time to Luigi.
To which city does she-wolf belong？

She-wolf, in Italian language is, lupa. If you go to Piazza Campidoglio on Capitoline hill (yes, that one with emperor Marcus Aurelius status), you will find a small column with the famous she-wolf status. The she-wolf is with the two brothers (and probably a line of tourists waiting to take photos there).

A Mythology of A She-wolf & Two Brothers?

No doubt, she-wolf belongs to Rome.

The story of Rome’s birth is like a mythology. A she-wolf living at the riverbank of Tiber, adopted the brothers, Romulus and Remus. Who were those two boys? They were the unfortunate descenders of the escaped “refugee” from Trojan War.

Rome, as the name, probably comes from “Rom-ulus”. Romulus “cut” off Remus while the two fighted for Rome’s ownership. The story binds much blood and violence, interestingly, we feel so fascinating to hear this story (We just love mythology and every stories with sex and blood. Proof: Game Of Throne! Oops, here’s no sex).

The second version of this Lupa story tells more about its symbolized meaning for Rome. If you go into Museo Capitoline, you will find the original status there. The she-wolf looks really fierce as she’s bearing her teeth and twisting her mouth. But, if you walk to the side, the she-wolf looks unhealthily skinny, even a bit bony. It seems she’s starving but still feeding the two brothers.

This Lupa, is a sign for violence and protection, just like Romans’ entire history is never far away from blood and defence.

Lupa, in Italian, is also a metaphor for the prostitute.

If you know the history of Rome, it is born from a cross-road between north and south, land and sea on the current Italy map. 2000 years ago, it was a perfect location for all traders and cruise teams, so as to anyone in service industry, including prostitution.

People cannot trace back who was the funder of Rome, but the clue pointed to the zone where the most complicated life events (prostitution) happened.

How intelligent our ancestors are! A perfect game of words, makes a “no-born” to a “god-born”.

Meanwhile, this also means, Rome is a place where anyone can become a hero, no matter his background ?

Look around, you will find as many as SPQR in Rome city center as you wish. It’s an abbreviation of Latin words, stands for Roman Senate and People.

When we talk about Rome, we think more about Roman Empire than whatever happened before that age, right?

SPQR, showed exactly in the before-empire era, when Rome is not an empire but a republic (roughly from 509BC to 27BC)!

Two senates were elected every year by their people – Romans, and those two lead other talents to manage the whole city – sounds pretty similar to most of countries nowadays! Yes, probably Rome’s SPQR is the first and the base of modern country nowadays.

Even when Rome went into the great Roman Empire era, SPQR didn’t disappear. The emperors used it as a way to show their goodwish – serving his people instead of ruling.

A hidden but maybe more real reason of keeping SPQR, might be the fact that Romans hated the absolute monarchy the most, and the empire didn’t want to make trouble for his new-born empire.

SPQR was restored in the medieval age, after hundred years of chaos after the empire collapsed. By that time, it had a new and brighter meaning of, liberty and democracy – and we know, this meaning was alive until now. This is probably one of the most frequently seen Rome symbols!

Eagle, or we should call it “Aquila”. This symbol is also essential to Italy, especially to something related military.

Aquila, was with Roman Empire and it was the symbol widely used by Roman army. The Aquila was the symbol of each legion, and “if you lose Aquila, you fail”.

Meanwhile, Aquila showed with SPQR, which we can guess easily now – The military fighted for Senate and People of Rome.

Nowadays, we still see a lot of Eagle symbols or status on Rome’s major palaces and monuments. The modern Italian military follows the ancient sign as well.

About this abbreviation, it’s a bit complicated.
It was a motto of House of Savoy-Sardinia, which the former one is a royal family since 1003, and Savoy region covers the western Alps area – a bit of Italy, a bit of France and a bit of Switzerland nowadays. The House of Savoy grows its absolute power to the unification of Italy Kingdom. Kings, Victor Emmanuel II, Umberto I, Victor Emmanuel III, and Umberto II, are all from this big family tree.
FERT, has a couple of different interpretations.
In short, they’re all, somehow, talking about unified religion, strength & fighting, and protection of the Kingdom.
Probably only a voice sounds a bit different. Some said it’s not an abbreviation but a Latin word “fert”, which means “he suffers”. But if we considered the timing of House of Savoy, which falls into the early Medieval era while the start of “golden age” of Christian, it probably again goes back to the religion keyword, and refers to “Jesus bears the sins for all human”.

In Rome, there are many secrets to explore. You might feel a bit boring after today’s reading, but I really hope all of you could not only enjoy its Rome’s beautiful monuments and great food, but also gain its history.

I would be happy to write more about Rome’s local culture and historical stories.

If you are interested to read a bit more history and culture topics of Rome, check this one , this one and this one, which I shared some Rome’s food and drink culture and some historic facts about Christmas and Rome. Or, you can go to my Culture Talk directly for a dive of all cultural topics. 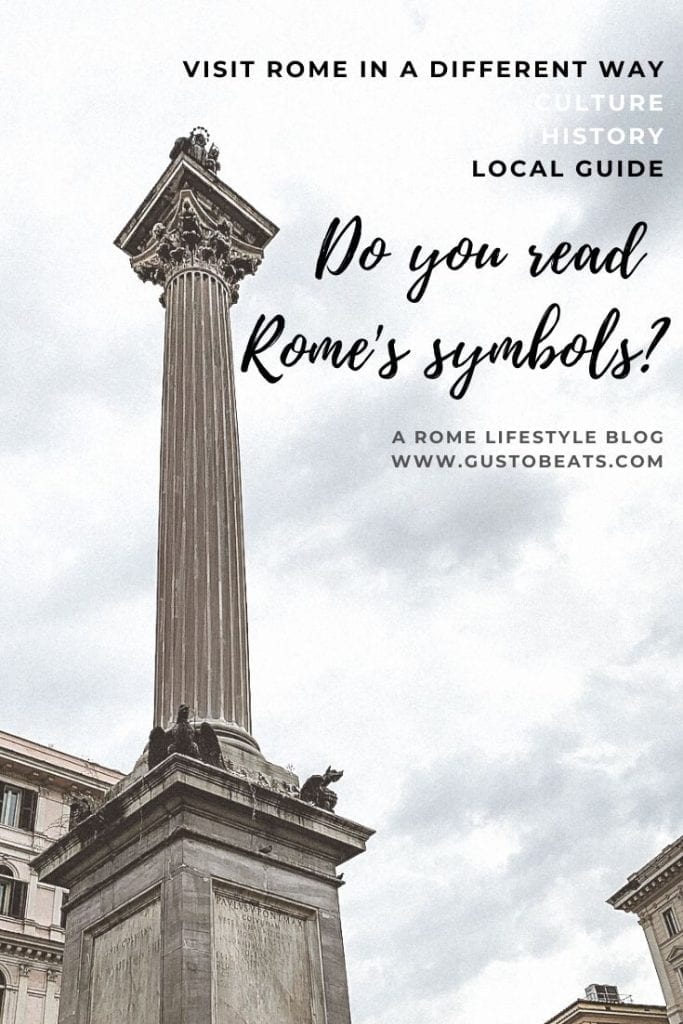 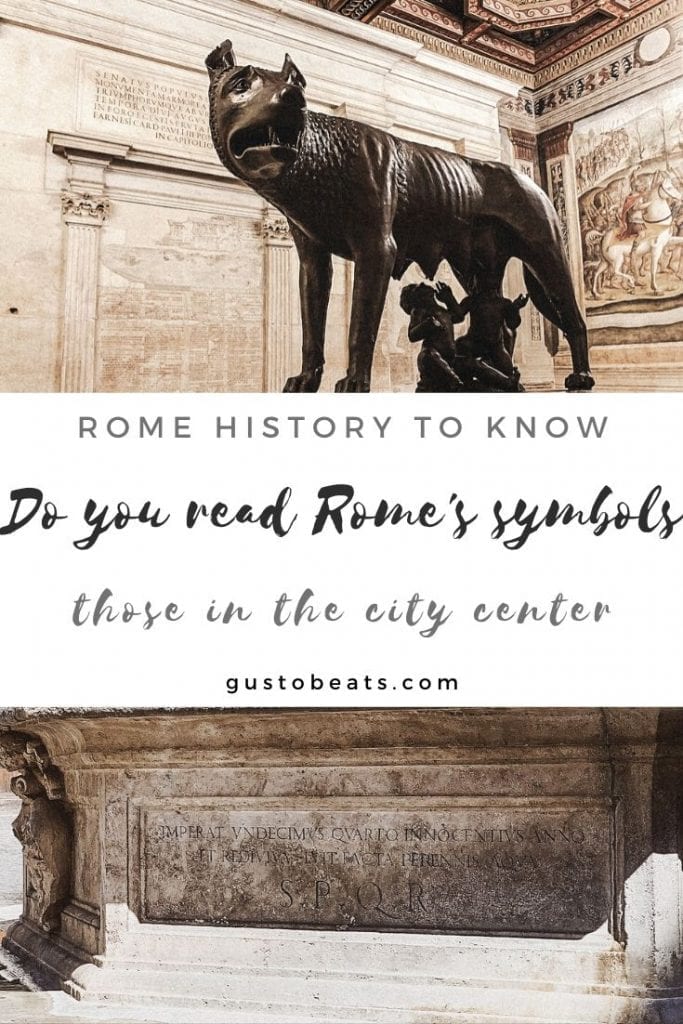 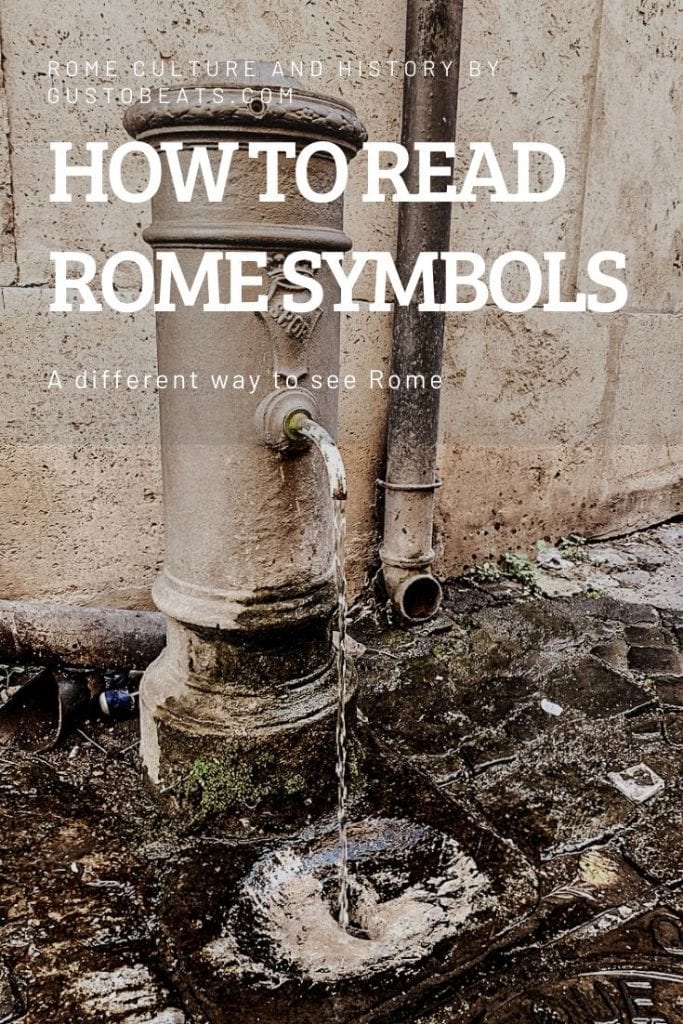 It’s so cool that you noticed this and then looked into it more to discover this whole history. Very interesting stories behind such obvious but hidden symbols. People take photos of these places every day and must will never notice this. I’ve probably done it too.

I’ve done it too!
But yeah, since I start to write blog about Rome, I’m trying to rethink what’s the topic that is not yet talked by everybody/every blogger, and it comes to this post. I was still worried about whether people will like this style of writing (thinking it might too bored to read)…
haha, lovely, thanks to your attention and comment! And, I know it, I know little historic story is cute for almost some people!!!

I find this fascinating. I did not notice these symbols but I’ll look for them next time.

Sure thing! NO worries, those symbols are super seeable, all around Rome city! 😀

This is fascinating! I love hearing the stories behind things like this so thank you!

Thanks Dani, and lovely to hear your voice here!
Personally, I always ask one question after another when Luigi (my bf) starts to talk a point of Rome’s thing, even just a Roman dish, there will be some many background stories to be found out!
Well, but sometimes, my too many questions, make him crazy 😀

This is so interesting! I’ve been to Rome many times, and I love history, yet there are many of these symbols I haven’t even notice. Thanks for sharing!

I’m happy that you enjoy my post about those symbols 🙂
I also feel fascinated about Rome’s history, and by reading and researching more, it just becomes more and more attractive, and I always think with some knowledge about a specific history of a place, when you see that place again, the feeling becomes always so different (in a good way)!!! 🙂
cheers,
Menty

This is such an interesting and well-researched post, thanks for sharing this! I will definitely keep an eye out for “SPQR” around Rome!

Hey Anita, thanks for giving a thumbup here :3
I’m pretty sure when you visit Rome, that “SPQR” will be all around you! 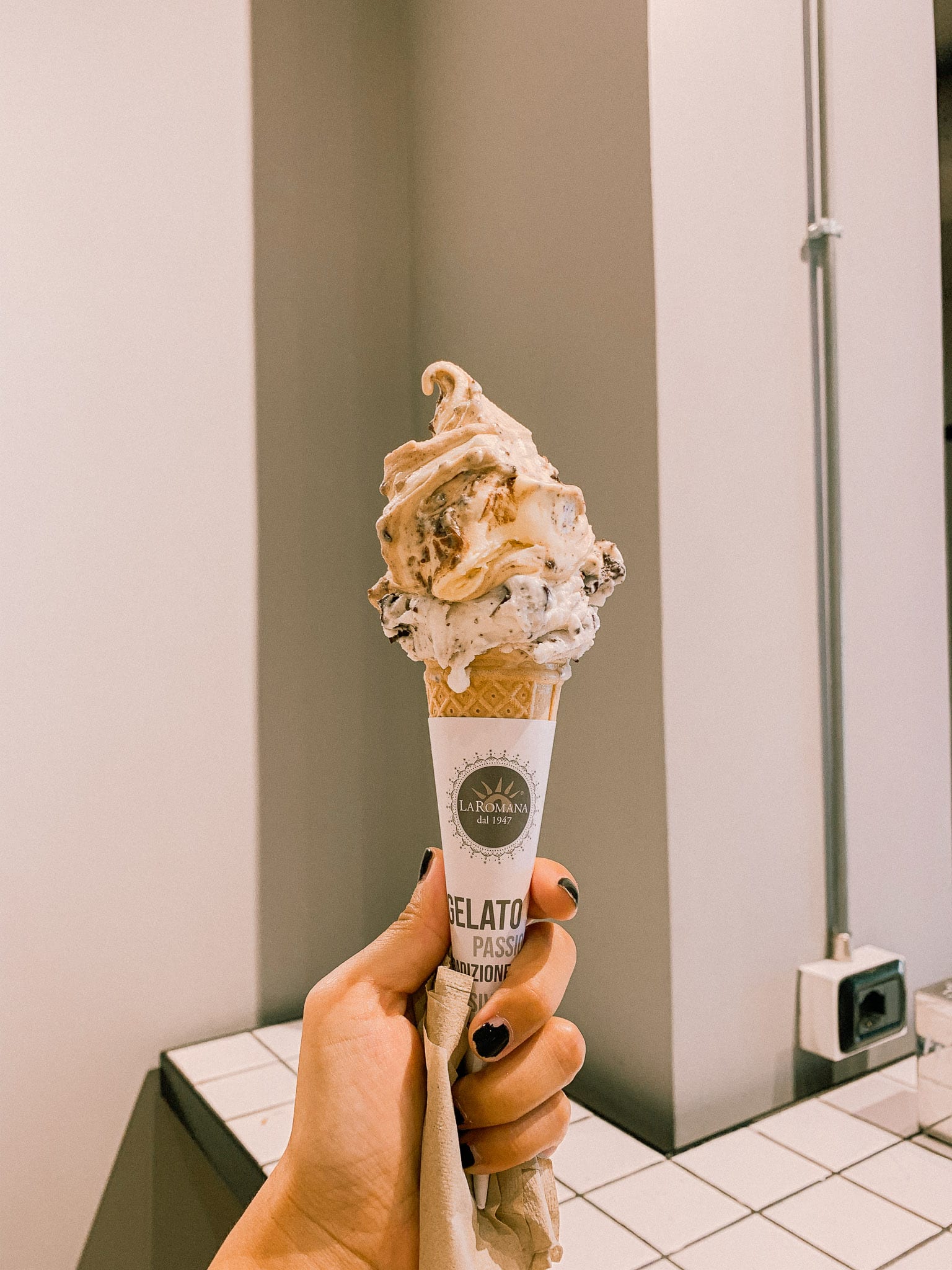